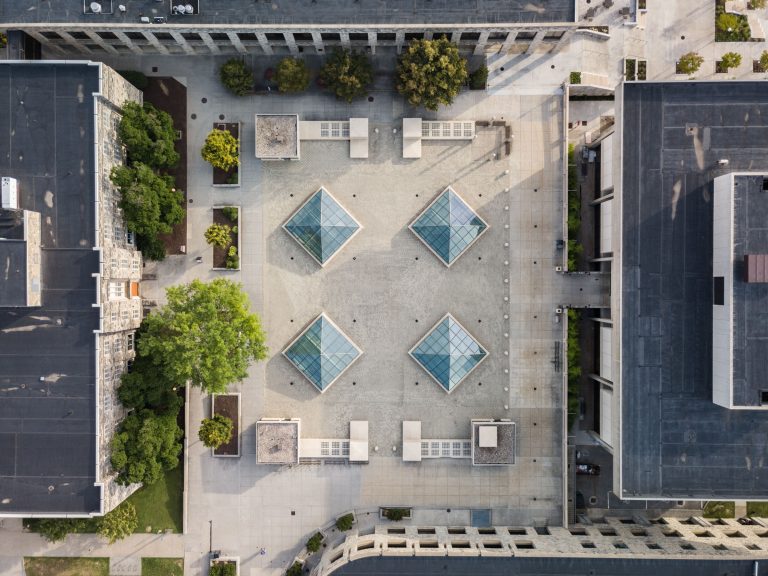 The School of Architecture + Design maintains extensive facilities to support its academic programs. Our primary facilities – Cowgill Hall, Burchard Hall, Burruss Hall and the Collegiate Squares Studio – are located on the 2,600-acre main Virginia Tech campus, located in the town of Blacksburg in the rural, mountainous region of Southwestern Virginia.

Blacksburg is approximately 12,000 acres nestled on a plateau between the Blue Ridge and Allegheny mountains. It is home to 41,700 local residents. Because of the town’s award-winning services, reasonable cost of living, safety, moderate climate, and abundant leisure activities, Blacksburg is consistently ranked among the country’s best places to live and has earned a reputation nationwide as a well-managed, stable, and forward-looking community. In 2011, Bloomberg Businessweek named Blacksburg the best place in the United States to raise children. Blacksburg has been ranked among the nation’s best places to live by Blue Ridge Country Magazine, Men’s Journal, 50 Best Small Southern Towns, The Sporting News, and Retirement Places Rated. Outside Magazine ranked Blacksburg a top-10 “dream town” for outdoors enthusiasts because of its proximity to the Appalachian Trail and the Washington-Jefferson National Forest. The area’s natural resources for hiking, biking, whitewater rafting, and climbing are phenomenal.

The New River Valley is situated between the Blue Ridge Mountains to the south and the Appalachian Mountains to the north, and is home to the nation’s oldest river, the New River, thus giving the region its name. The majority of land within the region is considered forested (68.3%) and agriculture continues to be a major portion of the region’s economy. With excellent rail and interstate highway systems (I-81 and I-77 to the south) the residents of the counties of Floyd, Giles, Montgomery, and Pulaski, and the City of Radford call the New River Valley home. The Valley is a dynamic area of industry and trade, in part due to its location within a day’s drive to approximately three-quarters of the nation’s major markets. The scenic vistas, historical and cultural attractions, and qualities inherent to the area are drawing tourists and businesses to this rapidly growing Valley.

A 2010 Wall Street Journal report ranked Virginia Tech among the top 25 schools for “best-qualified” graduates. The undergraduate programs in architecture and landscape architecture, both in the School of Architecture + Design, ranked No. 4 and No. 3, respectively, in the America’s Best Architecture & Design Schools study conducted by the journal DesignIntelligence. The school’s programs in interior design and industrial design also ranked in the study’s top 10 in their respective fields.